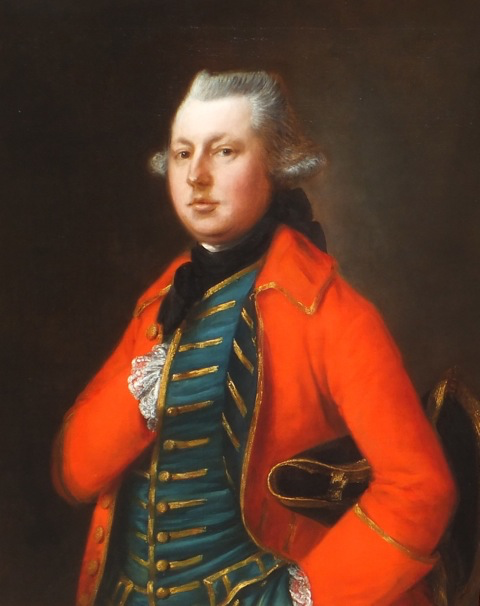 Portrait of Mr Coke of Brookhill Hall, half-length, in a red coat and blue waistcoat with gold embroidery, a tricorn hat under his left arm.
Literature : Gainsborough, Ellis Waterhouse. Page 60. No.158.
Provenance : By family descent to Roger Sacheverell Coke. Christies July 1938, lot 64. Mrs Helen Nelson, Kansas City, 1940 - 2003. Christies November 2006. Rau Antiques, New Orleans, USA. Private collection, UK.
The sitter in the current portrait is Richard Coke, of Brookhill Hall in Derbyshire. His family had owned the estate for generations, although Richard was one of seven sons and five daughters, and never became head of the family. His father, D'Ewes Coke (d.1751), was succeeded by his grandson, Rev. D'Ewes Coke, the eldest son of Richard's eldest brother George. The Rev. D'Ewes Coke continued the family tradition of artistic patronage, commissioning Joseph Wright of Derby in 1792 to paint the portrait of him, with his wife Hannah and his relative Daniel Parker Coke, now in Derby Museum and Art Gallery.Shown here in a red jacket, the sitter may have been a member of a militia or other regiment. His right hand is tucked inside his waistcoat, which (like the modern handshake) was a customary means of showing that a man was not holding a drawn sword.Gainsborough moved to Bath in 1759, where he quickly made a name for himself as a fashionable portrait painter. A measure of his success can be seen in the increasing cost of his pictures during his period in Bath: when he arrived, a half-length portrait such as
this would cost the sitter fifteen guineas; by 1774 Gainsborough could charge sixty guineas.
Oil on canvas
36 x 28 inches
framed 45 x 38 inches
Click the picture to see full screen
To request a price
or arrange a viewing
Please contact us on:
+44-(0)-7889-598005 (m)
+44-(0)-1455 290916 (o)
Enquire about this painting