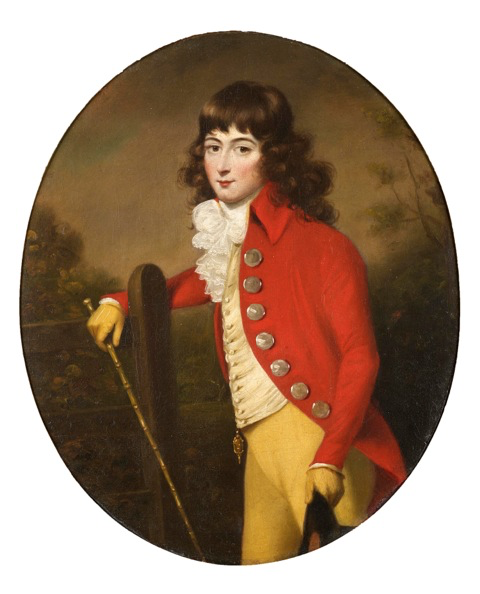 Portrait of Harry Croft (1775-1853
The eldest son of Stephen Croft of Stillington Hall, Yorkshire and Francis Clarke of Askham Bryan, Yorkshire, Harry Croft attended Eton College before joining the 6th (Inniskilling) Dragoons as a lieutenant in July 1793. At this time the regiment was begining a period of deployment in central Europe as a consequence of the revolutionary wars with France prompted by the execution of King Louis XVI. Croft would have found himself part of the campaigns in Flanders, the Netherlands and Germany, during which he rose through the ranks to Lt-Colonel (1808), the regiment later acting as part of the decisive heavy cavalry charge by the Union Brigade at The Battle of Waterloo. On the death of his father in 1813 he inherited the estate of Stillington and in 1822 married Elizabeth Charlton of Apley castle, Salop with whom he had two sons. He died at Stillington Hall in 1853.
The painter Francis Alleyne appears to have depicted Croft as a boy still at Eton c. 1787 as he wears the clothes distinctive to that school at the time: "The Eton boys had to wear red tailcoats ...with yellow waistcoats, brass buttons, white ties, and low shoes" (recollections of Henry Portman, 2nd Viscount Portman). Another portrait of Croft in an identical pose but of poorer quality than this portrait was sold at auction several years ago (31.1.09 Sothebys, NY).
Francis Alleyne was an itinerant portrait painter visiting country houses around England. He specialised in small, oval three-quarter lengths and occasionally exhibited between 1774 and 1790. His working methods seem to have paid off as many of his portraits can still be found in family collections, with his distinctive style enabling swift identification of others.
Examples of Alleyne's work can be found in the collections of the National Trust in the U.K and Yale Center for British Art, U.S.A as well as numerous private collections.
Oil on canvas
17.5 x 14.75 inches
framed 26.5 x 23 inches
Click the picture to see full screen
To request a price
or arrange a viewing
Please contact us on:
+44-(0)-7889-598005 (m)
+44-(0)-1455 290916 (o)
Enquire about this painting