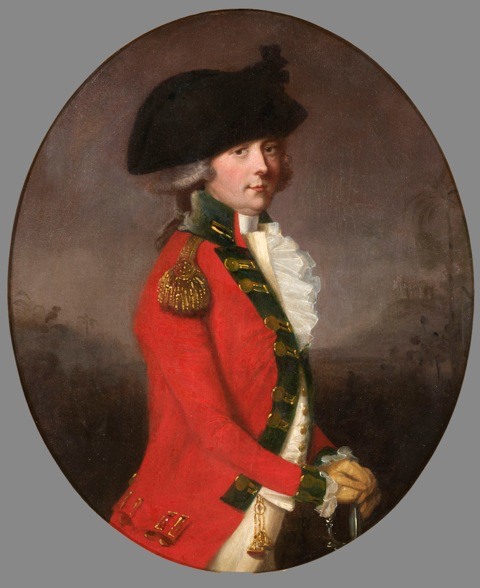 Thomas Hickey was born in Capel Street, Dublin, in May 1741, the 2nd son of Noah Hickey (1689-1766), a Dublin confectioner and Freeman of the City, and his wife Anne (d.1762). He was trained at the Dublin Society's Drawing Schools where he won five prizes in 1753-6; his first documented portraits date from 1758-9 (NGI).  He travelled to Italy c.1761-7, returning to Dublin for three years, mixing in the Irish immigrant artistic community centred on Solomon Delane. His return to Dublin was marked with a few important commissions, but an insufficient number to support his ambition; consequently he moved to London in 1771. He regularly sent paintings to the London exhibitions until 1775.  In 1778, he was in Bath, where he stayed for four years. In July1780, he joined a convoy of ships bound for India, but was captured en route. He was released at Cadiz and journeyed to Portugal, where he found much prosperous employment before returning to London in 1783. He travelled to Bombay in 1784, and found numerous commissions in India until his return to England in 1791. From 1792-4 he was on Macartney's Embassy to China, returning to Dublin in 1796. His return to India in 1798 was his last great journey, and he remained there until his death in Madras in 1824.

Thomas Bowser joined the Madras European Regiment as an ensign in December 1773, and ascended through every grade until he attained the rank of Lieutenant Colonel in 1797. His service included the successful campaign to capture Pondicherry in 1778 and also the swingeing defeat of the British at the hands of Tipu Sultan at Pollilur in 1780, where Bowser was captured.  He was held as a prisoner of war, heavily ironed, for four years until 1784.  He remained in the subcontinent, fighting in all the other Indian wars until his return to England in 1826.  During this long and distinguished service, Sir Thomas Bowser was twice appointed Commander-in-Chief of the Madras army. He also became Governor of Madras.  He never really recovered fully from the galling of his legs while in the dungeons of Bangalore, and it was this ailment which finally contributed to his demise in 1833.  He married Ann, daughter of Colonel Story, who was the widow of another East India Company soldier, James Brodie.