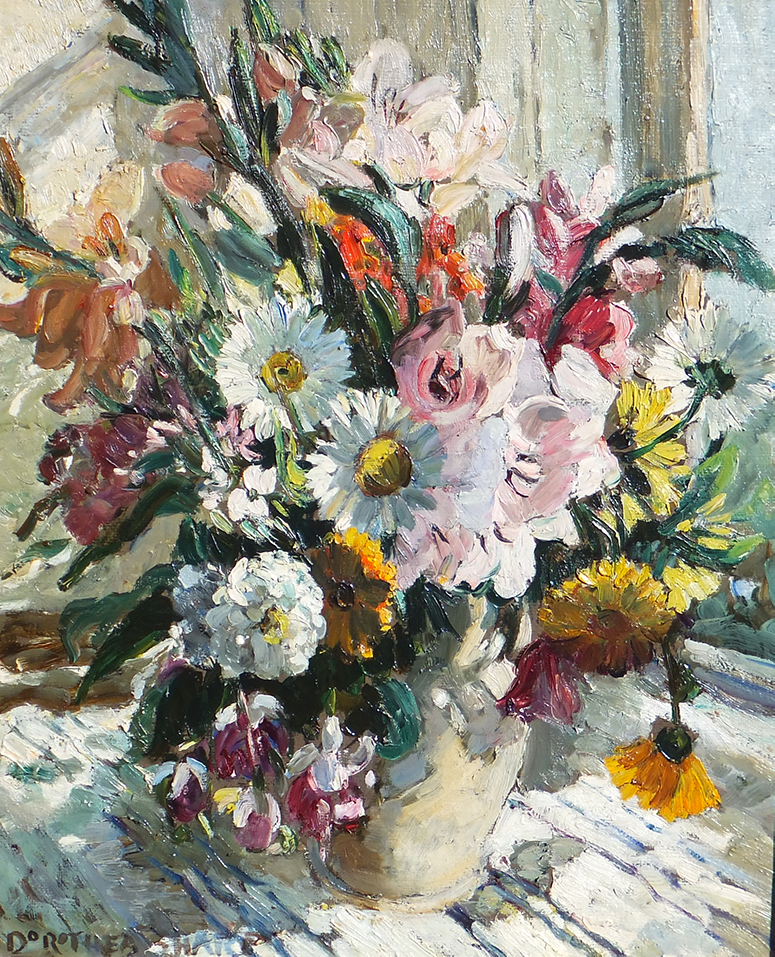 Artist: Dorothea Sharp, signed lower right.
Medium: Oil on board, 24 x 20 inches.
Framed: 31.5 x 27.5 inches.
Condition: Pristine.
Biography: Dorothea Sharp was born in Dartford, Kent and began her training aged 21, when, after inheriting £100 from an uncle. She attended Richmond School of Art where her work was greatly admired by George Clausen and David Murray. She went to Paris, where she first encountered the work of the impressionists - in particular Claude Monet. This had a profound and lasting effect on her art, resulting in the highly impressionistic and spontaneous style that she adopted throughout her career.
In 1903 she became an Associate of the Society of Women Artists, and in 1908 a full member, going on to serve as Vive-president. She was elected a member of the Royal Society of British Artists in 1907 and the Royal Institute of Oil Painters in 1922. Sharp exhibited at the Royal Academy from 1901-1948 and held her first one-woman show at the Connell Gallery in 1933; this was a great success and she was described as ‘One of England’s Greatest Living Woman Painters” by Harold Sawkins, editor of The Artist. Throughout the 1920s and 1930s Sharp travelled to Europe to paint, and also St Ives in Cornwall. She was made an honorary member of the St. Ives Society of Artists in 1928.
Medium : Oil on board, 24 x 20 inches
Framed : 31.5 x 27.5 inches
Condition : Pristine.
To request a price
or arrange a viewing
Please contact us on:
+44-(0)-7889-598005 (m)
+44-(0)-1455 290916 (o)
Enquire about this painting