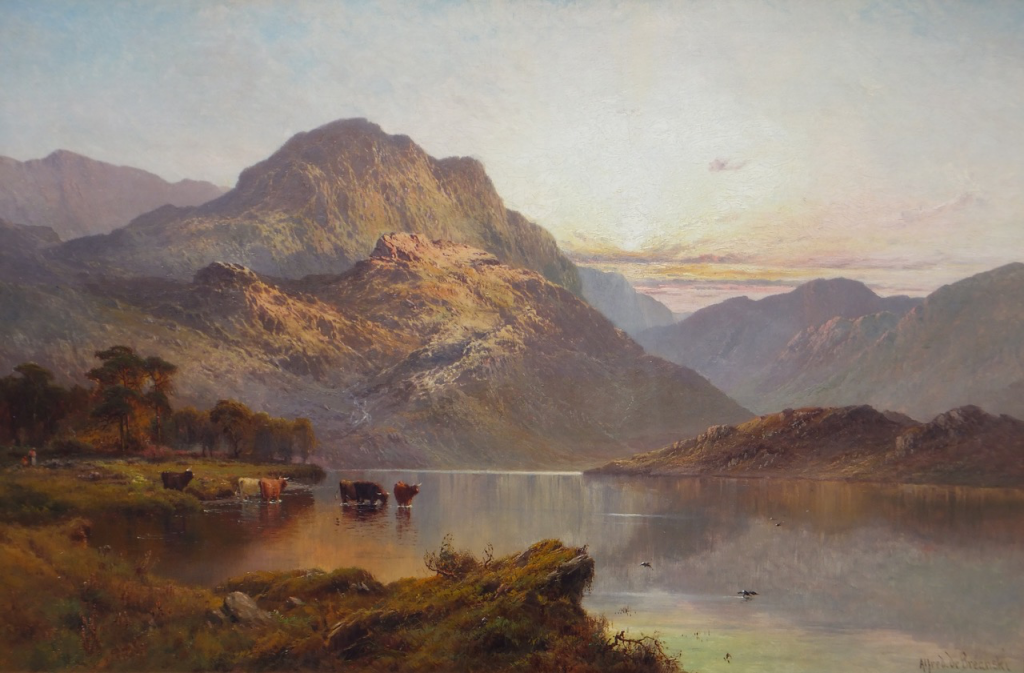 Artist : Alfred de Breanski Snr, signed lower right.
Provenance : Mandell's Gallery.
Biography : Alfred de Breanski was a distinguished landscape artist, famous for his magical representations of the Scottish and Welsh Highlands. His best works were often bathed in a flood of golden light, often depicting cattle or sheep. Alfred had a great passion for the Highlands and without doubt captured the atmosphere of the undulating landscape.
Alfred was born in London, son of Leopold Bréanski; his younger brother and sister, Gustave and Julie, were also painters. He made his debut at the Royal Academy in 1872 and he continued to exhibit there until 1918. He also exhibited at the Royal Institute of Oil Painters and the Royal Cambrian Academy. His many patrons included Sir James Lemon and the Bishop of Peterborough, who purchased the first picture that he exhibited at the Royal Academy “Evening: Softly falls the even light”.In 1873, Bréanski married Annie Roberts, a talented Welsh artist. They had seven children, two of which, Alfred Fontville and Arthur, were both to become painters. For much of his life Bréanski lived in Greenwich, Lewisham and Cookham and in 1880 he became a Freeman of the City of London.
Canvas
24 x 36 inches
Click the picture to see full screen
To request a price
or arrange a viewing
Please contact us on:
+44-(0)-7889-598005 (m)
+44-(0)-1455 290916 (o)
Enquire about this painting