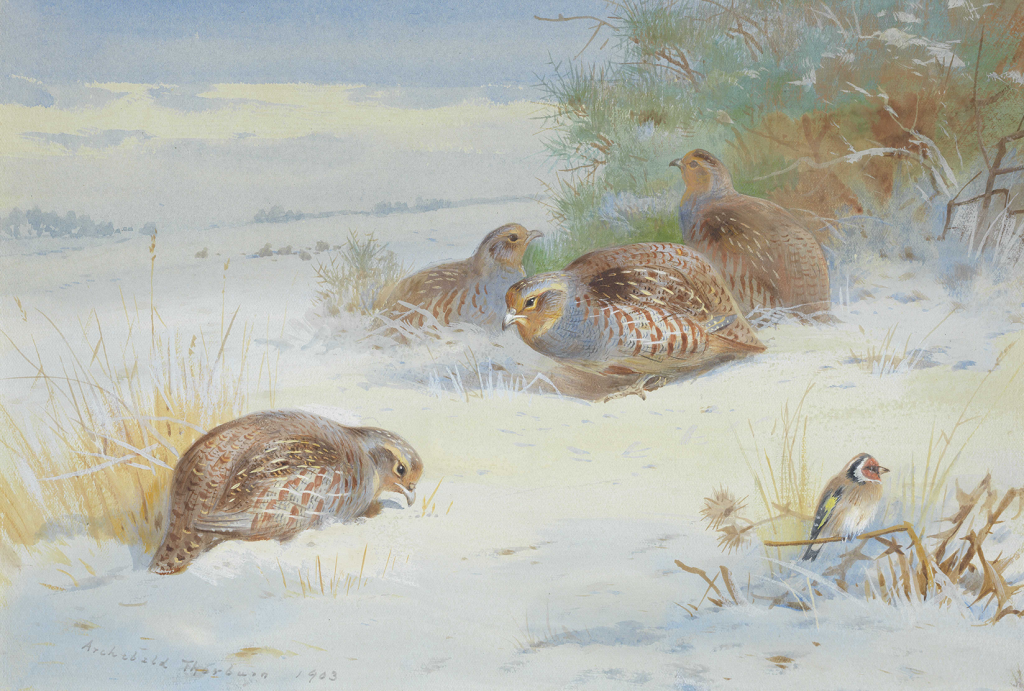 Artist: Archibald Thorburn.
Partridge and a Goldfinch in a Winter Landscape.
Biography:
Archibald Thorburn was born in Scotland on the 31st May 1860. He became one of the worlds greatest wildlife artists in the medium of watercolour. Archibald received guidance from his father who painted many fine miniatures. In his tentative years his father insisted upon careful attention to detail and of course anatomical accuracy - this held young Archibald in good stead throughout his career.
As a child, Archibald was a prodigious talent, by 1882 Thorburn published coloured plates which were received with great acclaim. These showed tremendous technical ability with a liveliness that captivated the public of the day.
Thorburn exhibited in the Royal Academy at the tender age of 20 in 1880 and carried this right through to 1900. Following his father's death in 1895, Thorburn moved to London and finally to Surrey. He married Constance Mudie and they had one child, Phillip.
His work remains highly collected, which stands as great testament to his technical ability and keen eye for capturing the countryside and its wildlife.
Watercolour, signed lower left, dated 1903
plate size 7 x 10.5 inches
Click the picture to see full screen
To request a price
or arrange a viewing
Please contact us on:
+44-(0)-7889-598005 (m)
+44-(0)-1455 290916 (o)
Enquire about this painting