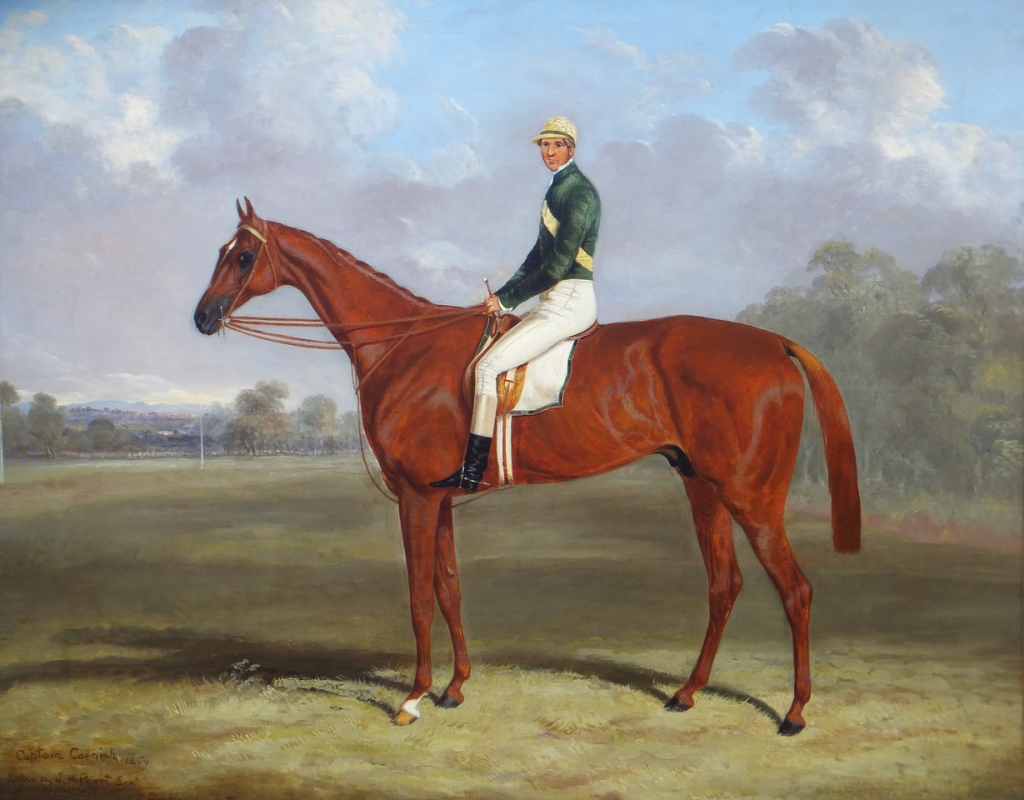 Artist: Thomas Walker Bretland 1802 - 1874, signed.
Captain Cornish 1854.
Captain Cornish was a chestnut colt by Lago. In 1853 under the ownership of the breeder Mr. William l’Anson, of Spring Cottage, Malton, the three year old thoroughbred placed second three times - in the Carnival Handicap at Malton with Oliver up, the Sweepstakes at Ripon with Chilman in the irons and the Dundas Handicap at York with Chilman up. That season he also won the Brocklesby Stakes piloted by Chilman at Lincoln. In 1854 he won the Malton Handicap with Wells up listed under the ownership of G B Cornish, who is known to have shared ownership with l’Anson. The jockey in the present work is wearing l’Anson’s colours of straw and green and by the inscription is identified as J H Peart, a jockey active during the mid 1850’s, possibly at the Nottingham racecourse.
Provenance: Sale USA 19/11/2014 - sold for £13,000.
Born in Nottingham on the 21st April, 1802 Thomas Walker Bretland was a son of an owner of a carriage and coach business. He joined the family firm in 1816 as an apprentice where he excelled. Thomas started sketching at an early age with his sole ambition to train and be an artist.
Thomas Bretland married Nancy Ingham and supplemented his income on receipt of commissions for horse portraits. His father died in 1840 and Thomas passed the family business into the hands of his brother. This enabled Thomas to concentrate on painting; he had many important patrons including the Dukes of Buccleuch and Montrose, Baron Rothschild, Lord Chesterfield and Lord Middleton.
Nancy passed away in 1843 leaving two daughters. From this point Thomas travelled widely, painting commissions in Ireland, Scotland and extensively across England.
Thomas married again in 1852 to Emma and they had a further five children. They moved to Nottingham where he was influenced by John Ferneley Senior. Many of Bretland's works were privately commissioned. His work is consistently of a  high quality and remains highly collected.
Thomas Walker Bretland paintings are also held in the Nottingham Art Gallery.
Bibliography: Dictionary of British Landscape Painters - HM H Grant. Sally Mitchell - Dictionary of Equestrian Artists.
Signed and inscribed Captain Cornish
dated 1854
ridden by J H Peart Snr
Click the picture to see full screen
To request a price
or arrange a viewing
Please contact us on:
+44-(0)-7889-598005 (m)
+44-(0)-1455 290916 (o)
Enquire about this painting