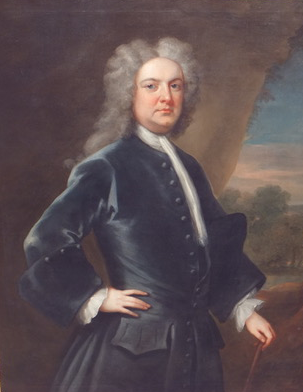 John Vanderbank, signed and dated.
Biography :  The Dictionary of British 18th Century Painters, Ellis Waterhouse
John Vanderbank 1694 - 1739
Historical, portrait painter and book illustrator. Studied from 1711 in Kneller Academy; in 1720 with Cheron, qv. Founded his own Academy in Saint Martin's Lane. He was a very lively draughtsman and his painting virtuosity is like that of Hogarth. Vertue thought that only intemperance prevented him from being the best portraitist of his generation. From 1720 he had an increasingly large clientele for portraits, often full lengths, and many are signed and dated. His chief book illustrations are for Don Quixote. He also painted many small versions of these (some in The Tate), dating from 1731 - 1736 to satisfy his creditors.
Canvas: Lined, could do with a light clean and varnish.
50" x 40" inches
Framed : 56" x 46" inches, nice period frame
Click the picture to see full screen
To request a price
or arrange a viewing
Please contact us on:
+44-(0)-7889-598005 (m)
+44-(0)-1455 290916 (o)
Enquire about this painting